"It's never too late to find the way."

The history behind the Camino Primitivo (or “The Original Way”) is its most compelling characteristic, and as its name suggests, it was the first documented route to Santiago de Compostela, dating back to the early 9th century.

At the beginning of the 9th century news of the discovery of the tomb of the apostle Santiago (St. James) sounded throughout Europe and Hispanic kingdoms worldwide.  The first established route of the pilgrimage was organized by the Asturian King, Alfonso II El Casto, who went to visit the place where the tomb, known as “Campo de Estrellas,” was found (the city we know today as Compostela, gets its name from this place).  When King Alfonso ordered the construction of a church at the site of the discovery the news spread amongst believers and so began the pilgrimages of hundreds of Christians along what we still know today as the Camino Primitivo.

The historical starting point of the Camino Primitivo therefore, is the city of Oviedo, which has become an obligatory waypoint for pilgrims from Northern Spain and the rest of Europe.  The relics in the Cámara Santa de la Catedral de San Salvador de Oviedo (Holy chamber of the San Salvador Cathedral in Oviedo) turned the city into a  core attraction for pilgrims, so much so that pilgrims traveling the Camino del Norte would abandon the Cantabrian coast to go through Oviedo, and those who came across the plateau changed directions in León to pass through the puerto de Pajares (Pajares pass) and go down to Oviedo that way.  For this reason it is said that, “He who visits Santiago but not el Salvador (in Oviedo) visits the servant but not the Lord.”  This is the origin of the Camino del Salvador that connects León and Oviedo.

The route begins in Oviedo and in its 312 kilometers passes through mountainous areas of western Asturias before entering the Galician province of Lugo and joining up with the Camino Francés in the municipality of Melide, some 54 kilometers before reaching Santiago.

After leaving Oviedo in its trajectory through the principality of Asturias, the route runs through the municipalities of Las Regueras, Grado, Salas, Tineo, Pola de Allande and Grandes de Salime.  The  ruggedness of the route, which for the most part goes  through the middle of nature, is compensated by its scenery and the extraordinary beauty of its landscapes: along much of the route you will find forests, streams, rivers, valleys, crop fields, and small houses and villages.  In fact, just a few kilometers from Campiello are the beginnings of what have been cataloged as some of the most beautiful stages of the Camino Primitivo, known as the “Ruta de los Hospitales.”  On our web page you can find information about this route and its alternative that goes through Pola de Allande and up to the Puerto de El Palo.

The monumental legacy of the route itself makes it noteworthy, and not just in Oviedo.  Along the route are many examples of religious architecture, like the Monasterio de Santa María la Real de Obona, a Romanesque construction from the 8th century, which you can visit before arriving to our albergue.

This is the oldest route and the natural choice for reaching the Puerto de El Palo (1146m).  It’s also one of the most scenic.  On clear days spectacular views of the mountain range combine with the natural charm of the region to make this section one of the most memorable because of its remarkable beauty.  In addition to enjoying the impressive panoramas of the mountains, it’s not uncommon to see cows and horses grazing gently in areas near the trail.

This path also coincides with the Roman road that went up toward ancient gold mines, and if you look hard enough you can still see the well defined traces of gold mining in the area.

The route passes by the ruins of the hospitals in La Paradiella (close to la Mortera), Fonfaraón and Valparaíso, next to Puerto de La Marta (1105m).  The existence of three hospital foundations gives us the idea not only of the importance of this route in old times, but also of its toughness and difficulty, especially in winter when the weather went from bad to worse.

Leaving from Campiello, we find the fork to take to the Los Hospitales alternate route in La Mortera (6 km), the last village before beginning the ascent that will take us to previously mentioned ruins.  From Campiello to Berducedo (which is normally the last leg and has an albergue) is a long 28 km, including 15 km of mountain trail for which it is recommended you take plenty of food and water.  In the puerto de El Palo the route comes together with the other that passes through Pola de Allande. 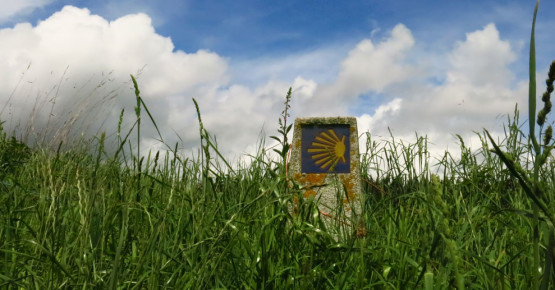 This route emerged as an alternative to that of Los Hospitales to avoid the harsh climate, most notably the strong snows during the winter season.  Its trajectory is plotted along the south side of the mountain and connects with the base of the village of Pola de Allande.  Through the entirety of the route you can enjoy the beauty of the environment and landscapes that change between small villages and streams with forests of chestnut, ash, oak, beech, birch, and hazelnut trees.  This route finishes in the locality of Pola de Allande, at the beginning of the climb to the puerto de El Palo, the point that connects with the Los Hospitales alternative.  The distance from Campiello to Pola de Allande, the next town with an albergue, is 15 km.

We use own and third party cookies to improve our services. If you continue to browse, consider accepting its use. You can get more information or how to change the settings in our Cookies Policy